Researchers from Oxford University Clinical Research Unit in Vietnam have shown that amphotericin B is more effective than itraconazole for the initial treatment of talaromycosis in HIV patients. The principal investigator, Dr Thuy Le  stated: “These results offer strong support to the call for more health policy and advocacy to improve access to amphotericin B across Asia. Implementation of the research findings is now needed in the region.”

The third most common infection that kills HIV patients in South and Southeast Asia is talaromycosis. This infection is caused by the fungus Talaromyces marneffei, (previously named Penicillium marneffei). The initial treatment with amphotericin B is effective; however this drug is not widely available and has many unacceptable side effects for which patients need to be closely monitored in the hospital. In South and Southeast Asia, itraconazole is commonly used as a substitute for amphotericin B, because it is widely available, cheap, well-tolerated, and can be given by mouth. However, until now the efficacy of these two drugs for treating patients with talaromycosis had not been tested.

In a clinical trial published last week in the New England Journal of Medicine, doctors in Vietnam in collaboration with researchers from the Oxford University Clinical Research Unit randomly assigned 440 HIV patients who were diagnosed with talaromycosis to either amphotericin B or itraconazole treatment in 5 hospitals across Vietnam. The study showed that despite more side effects, treatment with amphotericin B was associated with half the number of deaths compared to itraconazole, 11% versus 21% after 6 months. “In addition we found that amphotericin B killed the fungus in patient blood four times faster than itraconazole, and there were fewer disease relapse and complications in the amphotericin group”, commented Dr. Thuy Le. “Although amphotericin B has been included in the WHO essential medicines list since 2013, currently only 30-40% of patients with this infection in China and Vietnam are being treated with amphotericin B due to its high costs, poor supply chains, and concerns of toxicity.” 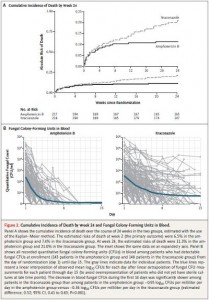 The results also suggest that a shorter course of amphotericin B treatment should be evaluated. If effective it would make the treatment more acceptable by reducing the side effects, and the shorter treatment duration would be more affordable. In addition, the survival benefit of the initial treatment with amphotericin B only became apparent after two to six months on therapy. This trial therefore serves as a useful reminder to the clinical research community to consider longer follow-up time frames in the design of antifungal treatment trials.